How can you tell a Halloween costume has been designed in Montana? It has snow pants! That’s the way October fly fishing in Missoula is going to end. But it sure doesn’t start that way! The Fishing and hatches can be incredible. Let’s take a look at some of the best flies for Montana in October.

October’s most well known bug is the October Caddis. Makes sense, right? This is a big caddis, size 8-10, and very difficult to miss on the water. As with so many other fall flies, like the Hecuba, it’s orange in color, and is best imitated with an Orange Elk Hair Caddis or an Orange Stimulator.  If you don’t have an October Caddis with you, a large Brindle Chute will work as well. If you see one October Caddis on the water, tie one on. The fish will be looking for them, even if there’s not a full-blown hatch. It’s a bit like Hopper fishing- throw to the likely water and be ready for the rise!

The more productive way to fish the October Caddis is subsurface, because it’s rare to come across a full hatch of these bugs. The big pupa are moving, and easy meals for trout looking to fatten up for the winter. The Bird of Prey, Red Fox Squirrel Nymph and the Orange Mop Fly are all very effective as a dropper or on a double nymph rig. Big and orange is the key to getting the trout’s attention. We recommend fluorocarbon leader when fall nymphing- the water is low and clear. 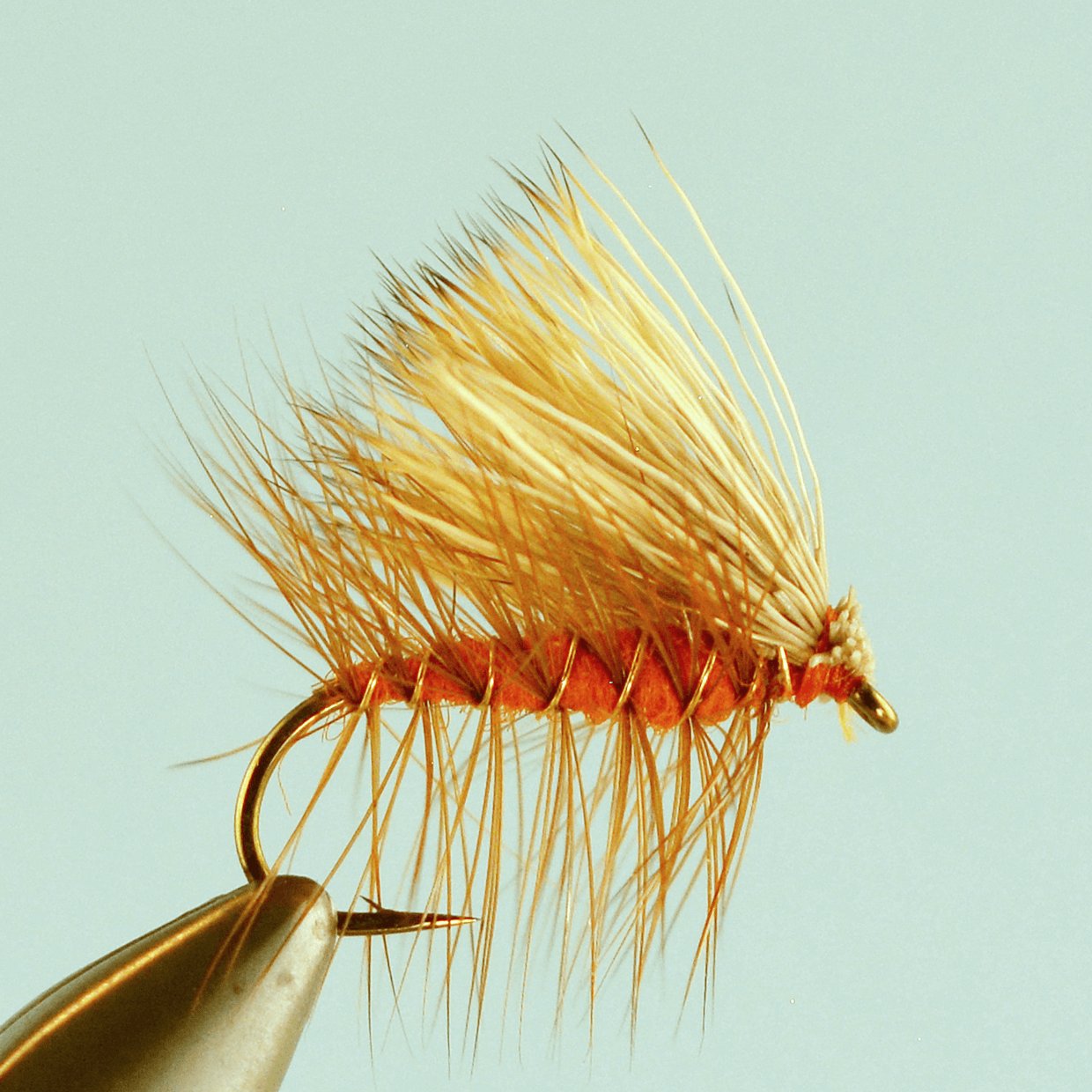 You have the chance of running into three or four different mayfly hatches in the month of October- Tricos, Hecubas, Blue Winged Olives and Mahoganies. The tricos are waning, but on warm, sunny days you will often find a spinner fall in the early afternoon. This can be a bit tricky, as the BWO’s will often be hatching at the same time. If you’ve made good presentations to a fish with a Blue Wing, and you’re not getting any eats, try Ron’s Trico Spinnner or a Hi-Viz Trico Spinner. It’s not fool proof, but it’s a good option if the BWO isn’t working. The BWO is a very strong hatch in October, especially on the colder, cloudy days. BWO’s are not a single species- there are many types of Baetis that hatch at this time. Luckily, they are all imitated by the same bugs. On the surface, be ready with a Tilt Wing BWO, Split Flag BWO or a Swishers Clumpa. These three flies cover adults, emergers and cripples quite well. The BWO is a tiny fly in October, and is best imitated with an 18 or 20, so have a light leader ready. There is also a BWO coming off in October that is very gray in color, so have a few small Parachute Adams or Purple Hazes in your kit to cover that hatch. 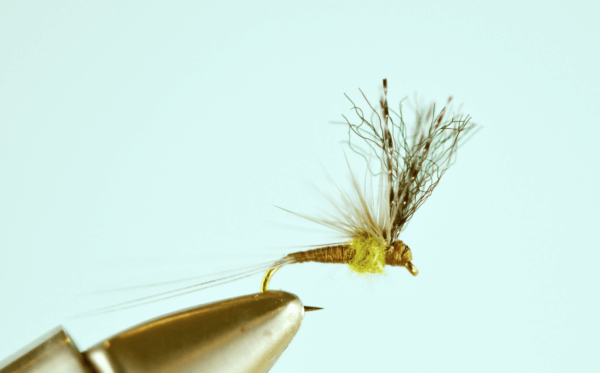 The Mahogany is also a very strong hatch for fly fishing Missoula in October. Once established, they come off like clockwork starting at 1:00 in the afternoon, and will continue until the water temps get too cold. The Mahogany Thorax is very good for this hatch, as is the Tiltwing Mahogany. If you’re going subsurface, a Caramel Specialist Jig or Solitude Pheasant Tail jig will take fish all day. The Mahogany’s will hatch in sun or clouds, though of course cloudy days are better. Again, the water is low and clear, so a longer, finer leader is called for. Think about some TroutHunter tippet in half sizes (4.5X, 5.5X) to get a little more stealth and a better drift. The Mahoganies are a size 14 at the beginning of the hatch, but as October ends, they will be as small as a 16, so have those sizes with you in nymphs and dries when you hit the water.

There’s an off chance you’ll see a Hecuba hatch as long as temps stay mild. You won’t miss it if it comes off, as the bugs are about a size 8! Have a Hecuba Cripple or a Brindle Chute with you, but don’t pin your hopes on this hatch- it can be very unpredictable. It’s much more apt to occur earlier in October, so have the flies with you, but don’t expect much. The hoppers are still a bit of a presence in October, but no where near as important as they were in late August and September. The cold nights and rainy October weather is taking its toll on the hopper population, but if it gets hot and sunny enough that you hear them buzzing on the shore, then they’re in play for the fish! As always, a bit of a breeze helps the hopper fishing, but if you decide to run a hopper, drop an SR Bullet Olive or a Solitude Pheasant Tail jig off the back to make yourself a more effective angler. Fly fishing Missoula in October can be one of the best times for streamers all year. The cold nights and shorter days tell the trout winter is coming, and it’s time to get some calories inside for the long winter months. While this blog writer tends to favor smaller streamers in fall like the Baby Swimcoach, due to the fact I’m heading out to match hatches, and need streamers that can be thrown on a 4-5 weight rod. In October, you can plan an entire day around streamer fishing.

The Blackfoot River is the first river to “turn off” due to the colder weather. It’s our northernmost river, and comes from the high mountains. It will get cold fast. But if you get out there in the first couple weeks of October, the streamer fishing can be extremely productive. Run the big flies like the Sex Dungeon or Mongrel Meat. Bang the banks, and start them as shallow as you dare. The fish are piled up behind boulders and off shelves, and are looking for a big meal before winter.

Rock Creek also has excellent streamer fishing in October. A Sparkle Minnow Sculpin is still a great producer up there at this time of year. Be ready for strikes in the middle of the river, where the bigger fish are. A wading staff is not remiss on Rock Creek at this point- those rocks can get very slippery this time of year, and if you’re trying to cover a lot of water with a streamer, good footing is paramount. October is a month of big weather changes in Missoula. It starts off like the end of summer, and ends up like the beginning of winter. This means being prepared for the weather when you go to the water. Extra layers and a raincoat are critical. Put a spare set of clothes in the car, and leave them there. If you fall in in August, you’re just annoyed. If you fall kin on a cold, rainy day in October, it can turn into more of a problem. Having dry clothes to change into can be a game changer if the weather is cold and you’re soaking wet.

October in Missoula can be some of the best and most peaceful fishing of the year. The cold nights are slowing things down in the morning, so showing up about 9:30 is not a problem. And by 5:00, when the day starts to get chilly, it’s OK to head home to a warm dinner and a cold beverage! We like to call it Gentleman’s Fishing. No longer do you need to be on the water at dawn, and stay until after nightfall. The fishing will be best in the heat of the day, so why work the edges. Sleep in, enjoy, and get out when the day is nice. You’ll find it easy and more productive, which is what October fly fishing in Missoula is all about.