Rock Creek is the quintessential western river, and Missoula’s only Blue Ribbon trout stream. Many locals consider Rock Creek to be their home waters, and live for Rock Creek Hatches. If you could design a river for stoneflies, Rock Creek would be the model. Rock Creek’s high gradient creates fast, highly oxygenated water and a large cobbled bottom that is absolutely perfect stonefly habitat. Here is a list of our favorite Rock Creek Hatches.

Rock Creek is known the world over for its Salmon Fly hatch. Work in the shop mid-June through early July and you’ll hear 4-5 different languages spoken, all with one common denominator- Salmon Fly. That doesn’t need translation. Whether on foot or by boat, the Salmon Fly hatch on Rock Creek is a clarion call to anglers- big bugs here.

The start of the Salmon Fly hatch can be hampered by high water. Run-off traditionally ends just as the Salmon Flies are heating up. Rock Creek’s gradient means little to no silt, which allows Rock Creek to clear long before other local rivers will. Clear or not, the Salmon Flies will hatch and the trout will find them. Also, clear or not, Rock Creek is a tricky river to wade and row during the Salmon Fly hatch. Anglers can cover 25-30 miles in a day by boat- the river is moving that fast. Care needs to be taken in boat or on foot. While on safety, if you’re wading and see a Moose, go find somewhere else to fish. Get between a female moose and her calf and you have real problems.

Traditionally, the Salmon Flies begin hatching at the mouth of Rock Creek, and move 1-2 miles upstream each day on average. Many fishing reports reference “where” the hatch is on Rock Creek- it’s saying where the hatch is densest as it moves upriver. The density of the Salmon Fly hatch is truly magnificent. Find yourself in the thick of the hatch, and you can have Salmon Flies crawling all over you, the boat and every tree on shore. With every fish in the river up and looking for them.

Early in the season, we favor the large, foam Salmon Flies like Damien’s SUV or El Camino Grillo for their ability to float in high water. As the river drops, we go a bit smaller to a Goulds Half Down or a Morningwood Special. A Double Bead Black or Peacock Stonefly Nymph will work well subsurface.

Female Salmon Flies will live for 2-3 weeks in the trees, returning daily to lay new eggs. Over this time, they shrink in size and darken in color. As the hatch moves upstream, crafty anglers will take a smaller, darker pattern like a Bullethead Salmon Fly or Rogue Salmon Fly and go down low. While the crazy hatch (and crazy hatch chasers) might be at Mile 30, the adults are still there laying their eggs at Mile 6, and the trout are still eating them.

Fair warning. Rock Creek is Missoula’s most easily accessed river, with Rock Creek Road paralleling the river for 52 miles. It’s not a secret that the best Salmon Fly hatch in the world is here. If you’re looking to fish in solitude, not another angler within miles, Rock Creek during Salmon Flies may not be for you. Rock Creek is justifiably famous for this amazing hatch, but it draws a crowd. Be ready for that experience.

The Golden Stones follow directly on the heels of the Salmon Fly on Rock Creek, and for many anglers provide more consistent fishing along the length of the river. The Salmon Fly can provide you with frenzied feeding, while the Golden will be consistent throughout the day. Unlike the single species Salmon Fly (Pteranarcys Californica) the Golden Stones are made up of many different but related species of stoneflies, which is why the Golden can vary in size from a 6 to a 12, with most in the 8-10 range. Be ready with multiple sizes and shapes to meet the changing hatch along Rock Creek. The size difference is why the Golden hatch is more consistent- more difficult for the fish to gorge on smaller flies and stop feeding.

To be honest, we flipped a coin between the WMB’s and the Skwala Stone. Both appear in the Spring, starting in late March and moving through run-off. Rock Creek hatches tends to be a bit behind in the Spring hatches because it’s in such a steep, narrow valley. Takes a few more warmer days to get the water temps to where the WMB’s will hatch. When they do, they come alive along the length of the river.

Don’t ask an angler where his favorite Western March Brown water is, because they’re not going to tell you! Rock Creek moves quickly, and there aren’t many places for a trout to set up for a mayfly hatch. It’s not the quick dart to the surface for big food like a stonefly. Look for the WMB’s along the edges of the river, and be ready with some strong mending to get the drift. The good news is the trout up and eating don’t tend to be fussy, and a well presented fly in the correct size and color is effective most of the time.

We favor the Hare’s Ear Dry or Parachute Adams when the Western March Browns are on the water. If you feel you need a bit more, the Last Chance Cripple will do the trick for the fussiest fish. If you see a few WMB’s flying but don’t see any active risers, work the fly over the good water. For some reason, prospecting with a WMB is effective, so take advantage of that.

Rock Creek is a stonefly factory, and the Skwala is no exception. Depending on the weather, the Skwalas may start as early as mid March, but will be in full swing by the end of the month. Rock Creek is typically low and clear when the Skwalas hatch, so no 1X tippet on a short leader here. You’ll need to get out a bit, and work with the lightest tippet you can when using a Skwala.

The Skwalas are found along the length of the river, and in the Spring are not fished as heavily as other local waters, specifically the Bitterroot River. Just as Rock Creek is famous for the Salmon Fly, the Bitterroot River is famous for the Skwalas. A bit of contrarian fishing can reap big benefits with Skwalas on Rock Creek. The hatch isn’t as dense as the Bitterroot, but neither are the fishermen, so that can be a good trade off. It’s not that Rock Creek doesn’t get a strong hatch, it’s just not the strongest. Use that to your advantage.

We love the Morningwood Skwala on Rock Creek, as well as the Rogue Stone Skwala. These two flies are strong floaters, and will easily support a WMB nymph, like a Tungsten Jig Hare’s Ear, so you can double your chances at this time. If the day calls for a low floater, go with the Rastaman Skwala or the Half Down Skwala. Both are very effective in slower water as well as days when the fish are a bit sluggish.

Rock Creek is home to many caddis species, and late in the season the big boy comes out to play. The October Caddis is Missoula’s largest caddis species, and when they’re on the water, the trout are eating them. It’s rare to find enough October Caddis on the water to where the fish will set up and consistently rise to them, but that doesn’t matter!

If you see an October Caddis on the water, tie one on the end of your line and start prospecting. If there’s one, there’s more, and the trout know it. Work the likely water, and don’t be afraid to put 3-4 casts over a likely spot. Sometimes a few extra casts alert the trout to the hatch, and you’ll take a trout that thinks it’s missing something.

Our two favorite flies for this hatch are the Orange Elk Hair Caddis and the Orange Stimulator. Both are strong surface performers, while the Stimulator has the added bonus of floating high enough to use a dropper. The Bird Of Prey is a great October Caddis pupa, and you can also run an Umpqua Pheasant Tail Tungsten Jig to imitate the Mahogany nymphs that are also present in the Fall. Be ready for a explosive rises and hard subsurface takes to the October Caddis. 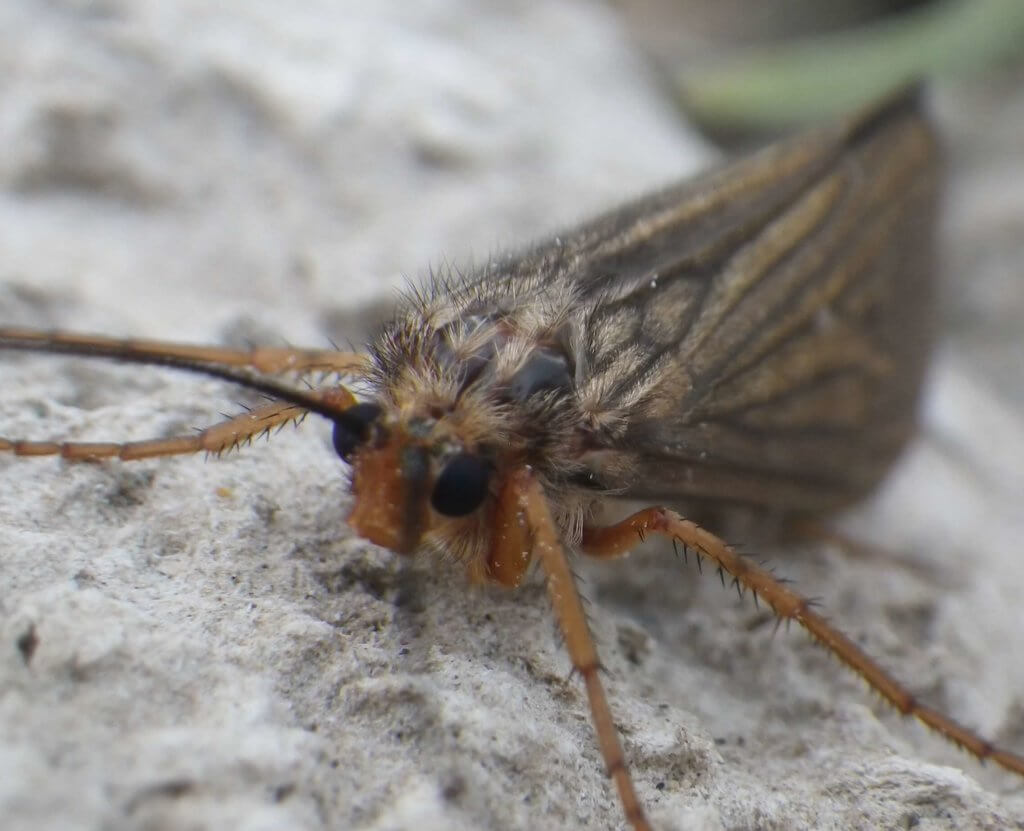