The Lowdown on Cripples, Duns, Spinners and Emergers 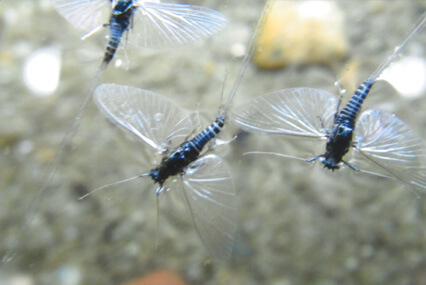 So much gets written about matching the mayfly hatch. And rightfully so, because when the hatch is at its most intense, the fish are the most focused. They can concentrate on one very particular phase of the hatch, or in one spot on the water column, and if you’re not there, well the trout aren’t going to change their feeding to make you happy!

Trout have an IQ of 4. We use this to set up this example of how a trout feeds during a hatch. Imagine a person with an IQ of 4, standing in front of a conveyor belt, which is bringing things by. Apples, cherries, tomatoes, strawberries, red seedless grapes, raspberries and radishes.  All similar, but different. And all of a sudden, many cherries are coming past and the person at the conveyor belt eats one. It’s good, and they eat again. Imagine the focus needed with a 4 IQ to concentrate on finding cherries. It takes all they’ve got. They lock in, and everything else is out of the picture.

That’s a trout in a feeding lane. They’re on a fly, concentrating for their lives, and nothing is going to break that intensity. As anglers, we might put on a tomato- hey it’s close! But it’s NOT a cherry. It goes by. Same with a raspberry, or cranberry or strawberry. You need to be exact, because the fish isn’t coming out of their little cone of concentration to think of anything else. They don’t have the brain power.

Now, so many cherries are coming down the conveyor belt that some have stems and some don’t. Some are solid red, and some are red/yellow. Again, the person at the conveyor belt gets focused on stems, or no stem, and the feeding process becomes that much more complex. All of a sudden, the person pulling food off the conveyor belt is only eating cherries with no stems that are red/yellow. Yes, there are other cherries going past, but now the focus is tighter, and the food source has become more limited. We think that’s the simplest way to understand what’s occurring during a strong mayfly hatch.

Now let’s get to mayflies. When the blanket hatch is on, like PMD’s, Tricos or Blue Winged Olives, there are many stages of the fly coming past the trout. The fully emerged dun, drying its wings in preparation to fly off. Emergers, which are nymphs breaking their way through the surface film in preparation to become duns. And then there are the cripples. A cripple is a fly that has not successfully made it from emerger to dun. When asked, we say a cripple is simply an emerger that wasn’t capable of becoming a dun. All of these different stages of the same insect are going by at the same time, and like the person at the conveyor belt, the trout will often focus on only one stage.

The best guides in Missoula, the best anglers in Missoula and all the shop people will start with a cripple. They often don’t change from that choice, and for very good reason. Nature is a harsh place. If a trout expends 4 calories to move for food, it needs to take in more than 4 calories to survive. We’ve all seen trout come from 5 feet away to eat a hopper. Because the energy expended will be more than replaced with the caloric intake from a hopper. Contrast that with a trico or BWO. Those bugs are tiny, and the reward is much less. A trout will not range far to take in few calories. It’s a fact of nature.

A cripple, to a trout, is a stationary meal. They can’t get away. And that’s critical for a feeding fish. Once the energy is expended, the trout can’t get it back. A cripple is an insect that WILL NOT fly off just at the moment of rising. Again, we’ve all seen fish come out of the water chasing an insect. It’s trying to take in calories to offset the energy expended. It NEEDS the reward at the end of the energy use. Miss that meal too many times, and it starts to die. Not friendly, but true. When an animal is crippled, it becomes easier prey for the predator. Slower to move, easier to eat. Just what every predator is looking for. When there are enough cripples on the water to allow a trout to focus on that phase, they will often do it.

There are more than one type of cripples. You have the failed emerger, caught in its shuck with the wings ¼ to ¾ extended. A cripple may have gotten 10% out of its shuck before failure, or 90%. The wings may be almost fully extended, or maybe just a nub has come out. This is such a boon to the fly fisherman. Once an insect has completely emerged into a dun, they are all exactly alike in size and color (for the most part). But a cripple can vary in length, depending on how far it got in the emerging process. And exact size replication isn’t always as critical with a cripple as it is with a nymph or dun.

The other type of cripple is a mayfly that has emerged, but then ran into problems. Blown over by wind, or simply collapsing onto its side from the energy expended while emerging. Once a mayfly’s wings touch the water, it’s done. They don’t have the strength to pull their wings out of the suction created by the meniscus. Close inspection of the bugs floating by you will sometimes show an insect frantically beating one free wing as the other remains in the surface film. That bug is a cripple, but of the second variety.

If only we had a dollar for every time we cast over fish that were breaking the surface but not taking from the surface! We wouldn’t be writing this blog. We’d be retired, and hiring the best guide in Missoula to take us fishing every day!!! When a trout is taking an emerger, it’s eating just below the surface, and its back breaks the water as Mr. Big returns to its feeding station.  And no, the trout is not going to come up that extra half millimeter to make you happy! The best way to handle this is to drop a 6” piece of leader off your dry or cripple, and tie on an unweighted nymph. The short dropper will keep the nymph at the correct depth, and you’ll start to take those “rising” trout. Look for bubbles (or the lack of) to identify those rises.

While we’re on the subject of critically watching rise forms, we’re going to talk about spinners. A spinner is a spent mayfly that has returned to the water to die. The classic form is both wings flat against the water, like a cross, though many spinners will have both wings flat on the same side, and their body curled around their wings. Again, the spinner is a stage of life where it CANNOT escape. The rise form to a spinner is very distinct. It looks as if the trout is coming up and just kissing the surface. Very subtle, very gentle. The PMD’s and Ped’s generate a lot of spinners, and once you’ve started to study rise forms, and see the differences in them, the spinner rise will be quite noticeable. Have some spinners with you, and all of a sudden those fish that went begging are in your net.

Duns. Spinners. Emergers. Cripples. We bandy those terms about like it’s general knowledge, but trust us, that information was hard won. It’s attention to detail that gets you to that point. Learning how trout operate and feed takes time on the water. Watching different rise forms is not easy. It’s tough to take a step back and think when you’re surrounded by trout breaking the surface in a feeding frenzy. But if you take 3 minutes to just look, if you’ve prepared your fly box with the different stages of a mayfly’s life cycle, adding in the failures known as cripples, you’re going to start talking more about how many fish you caught, and less about how many fish were rising!