September is another month of transition for Montana fly fishing. While nights are getting shorter, and temps are starting to moderate, the start of the month feels a lot like late August. Heat and warm water temperatures are still pushing the angler to the edges of the day. The Spruce Moths are waning, but in the early September heat, the Tricos are still going strong. People are talking about Mahoganies and Hecubas, but it’s still summer. In early September, it’s a whole lot better to be thinking Hoppers, beetles and ants. The Hoppers have been growing strong for 2 months, and you‘re going to need big hoppers as well as mid-size and small. The ants and beetles are still effective as well.

We’re waiting for that magic moment, the moment that transforms the ninth month- September rains. Not the drizzles that might cool you down, but the long, soaking rains that bring both the air and water temperatures down. The rains that start to knock the Tricos out of their position of prominence, replacing them with Blue Winged Olives. The Mahoganies respond to the changing conditions, as do the Hecubas and the October Caddis. When the rains come, the fishing is transformed.

The rain isn’t all that good for the hoppers either. Many won’t survive the damp and the cold, but don’t leave that box at home. The hoppers are still active, there’s just not as many as there were in the high sun. But a sunny day after the rains will bring the hoppers out again, and in numbers.

Now you’re thinking, so when do these rains come? If we’re lucky, they come in the second week of September. If we’re not, they may not come until the last week of September. When the cold temps are late, the Mahoganies, Hecubas and other insects still hatch, just not as initially prolifically as if they were spurred on by an early weather change. The Blue Winged Olives are especially thrown off by late rain. They enjoy cool, cloudy weather, and when summer hangs on till late September, the BWO’s don’t really strongly establish. True, the Tricos can still be found, but they’re waning pretty severely by the end of the month.

The cooler, longer nights are also flipping the trigger on some of the bigger fish. As the days shorten, the big fish’s appetites grow. They know a long slow eating season is coming, and it’s time to find big food. This is when the streamer fisherman can really make hay. The Brown Trout are spawning, running up the tributaries of the Blackfoot River, Bitterroot River and Clark Fork River, which includes Rock Creek! When the big Browns are moving, the streamer fishing can be extraordinary. It’s not all dries at the end of September.

October fly fishing in Montana can be an interesting time. The first of October can often be shorts, wet wading and sunny skies. But Halloween? Well, the crafty Montana veteran knows a well-designed costume incorporates snow pants and down parka. Lots of weather changes in October! The fishing will change almost as fast as the weather, and it certainly follows the temperature changes.

Many in the Missoula fly fishing community believe the last week of September and the first two weeks of October is the best fishing of the year. The weather can be fantastic, the scenery memorable and the wading is a dream. We know it’s often called gentleman’s fishing. The longer, cooler nights mean you no longer need to be on the water at the break of day. The sun sets earlier, so even if you fish till sunset, it’s only 7:30. The crisp, cool days and the turning of the leaves and aspens make October a truly special time to be fly fishing in Montana. The days are easy, the scenery is a kaleidoscope and the fish are moving.

This is a float that is absolutely unique to Missoula fly fishing. Pick a Saturday afternoon when the Grizzlies have a home football game. Drop your boat in above Missoula right about game time. As you float down the Clark Fork River, casting to rising fish or ripping a streamer, you will hear the sounds of the game echoing up and down the river valley. The ebb and flow of the Grizzlies will blend with the flow of the river. As you pass the DoubletTree, stop for a beverage. There are other spots to stop in town as well, for lunch and drinks. The town float on Grizzly Saturday can be a unique Missoula experience.

The dry flies are still very much with us. Mahoganies and Blue Winged Olives are as steady as they can be early in October. The October Caddis are now out in the biggest numbers you’ll see all year. Hoppers, well they’re iffy. If the nights have been warm and dry, they might still be a factor. But cold, wet nights will shut the hoppers off pretty rapidly. Check our Missoula fishing report, keep an eye on the weather, and bring your hopper box as needed! While the October dry fly fishing can grab your attention and hold it, serious streamer fishermen know this is the time to work the structure for Mr. Big. The trout are looking to take in some calories before the onset of winter, and when the weather is warm, the fish will actively slam a streamer. This is the time of year when yellow, brown and orange streamers rule. Another great thing about fall streamer fishing is the fish are relatively easily found. With the seasonally low water, the bigger fish have fewer places to be, and holding water is more easily identified.

As far as the rivers are concerned, this is Missoula fly fishing conventional wisdom. As the weather gets colder, the rivers start to slow down. The Blackfoot River, being our furthest north and highest elevation river, is often the first river to “turn off”. It gets colder faster, stays colder longer into the day and may not offer up the best available Missoula fly fishing. On the opposite end of the spectrum is the Bitterroot River. Furthest south, lower elevation, the Bitterroot will tend to fish well the longest. Rock Creek, despite being smaller and in a canyon, fishes well through most of October. The Clark Fork River, as the largest drainage, is least affected by the early cold. But once the Clark Fork water temps get lower, it tends to stay that way. All the rivers are still fishing, it just might make sense to monitor the USGS web site for water temperatures.

As October stretches to November, Missoula fly fishing days get shorter and shorter, and the hatches begin to wane. As the nights go below freezing, the fishing day may not really get started till about noon or later. Once again, depending on the temperature, clouds may or may not be your friend. As the temperatures fall, the sun helps move the trout by warming the water. On warmer days, hope for clouds. But by the end of October, you’re consulting the weather forecast before deciding to fish, if you have that luxury. For those who are going, check the weather to make sure you’ve got enough layers! The fishing hasn’t disappeared, it’s just a lot more weather dependent. Dress appropriately, be on the water when the fish are active, and October can be one of the best months to fly fish in Missoula.

November is the month that separates the die-hard from the fair weather fisherman. Missoula is going to have some warm days in November, and the fly fishing in Missoula can be decent. But it’s also sneaking up on Winter, and you’re going to find your opportunities are limited, at least when it comes to finding good fishing. On the warmer days, you will still see Blue Winged Olives out, though you do have to be at the correct place at the correct time. Not really different from most fishing, but it seems to feel a bit more pointed in November.

Most of November’s fishing is going to found subsurface. The flies you use should be a bit on the smaller side when you’re nymphing. The insects have not yet grown to their full size, as they will have in February, so a bit smaller is a good rule to work with. This doesn’t apply to streamers! If the weather is warm enough, and you choose to throw streamers, most of the minnows that hatched in Spring are pretty much full grown. A good sized streamer will be the correct size. Move it slowly, as November is the month when the fish really begin to establish their winter lies. The colder water is slowing down the trout’s metabolism, and the colder water is holding more oxygen. The fish are searching out the slower water, and not ranging as far for their food. This will become more apparent as November progresses and temperatures continue to fall.

November can offer a solitude on the water not often found in Missoula. Hunting season is in full swing- the Grizzlies are playing football and a lot of anglers have put down their rods and started getting their skis tuned up. If you’re looking to be on the water with no other anglers in sight, the fly fishing in November can be a dream come true. With a little luck, you might find an hour of dry fly fishing, and the nymphing will be strong. With the proper weather, you might move some bigger fish to streamers. All with very little pressure on the river.

But again, it’s all weather dependent. The temperatures are going to fall dramatically through November, and fly fishing in Missoula will be completely based on how the weather cooperates. Monitor the USGS website for water temps, and the Missoulian Angler fishing report for the best information on whether you decide to hit the water or not. And it’s basic safety precaution time as well. Put some dry clothes in the car. Don’t range 5 miles up or down river. If you fall in the river in August, you’re an object of humor to your friends. Fall in in November, and the consequences could be a little more significant. Use that Rising Net handle to hold some matches and Firestarter instead of the usual stash. 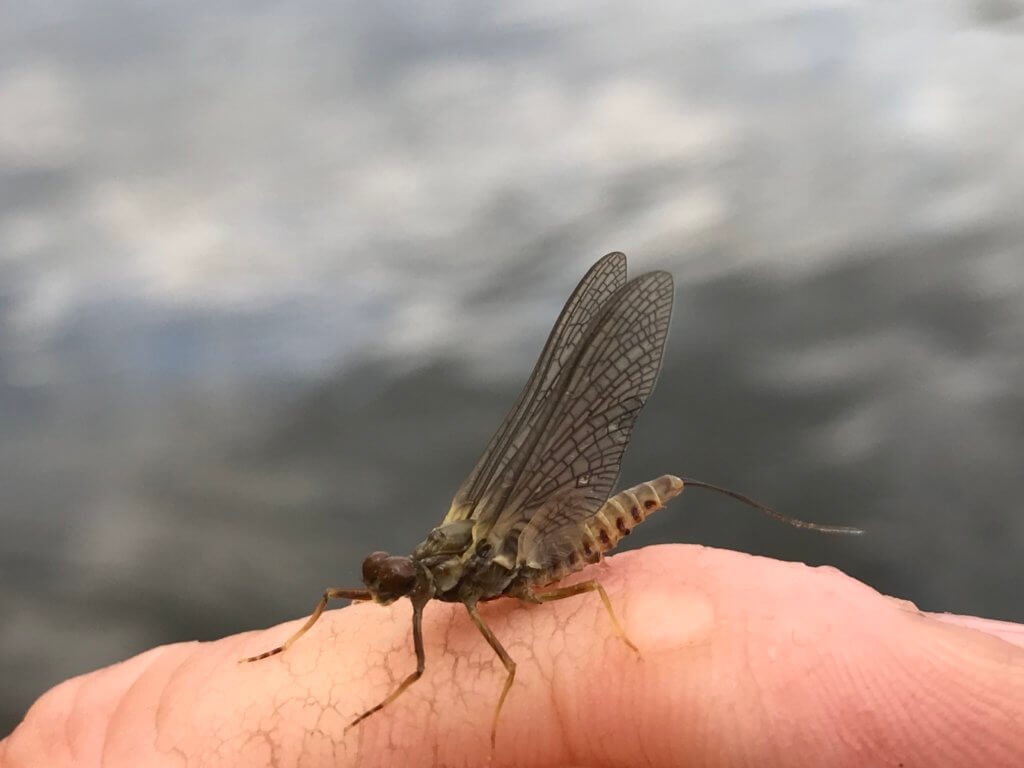 Midge
Items in Your Cart: