The Clark Fork River defines Missoula. It runs through the heart of downtown, gathering all our local rivers between its banks, and majestically flows to the Idaho border. Over its 310 mile length, the Clark Fork River morphs from a tiny S-Shaped meadow stream to the biggest freestone river in Montana as it pours into Idaho. Clark Fork River fly fishing truly has something for everyone!

The Clark Fork has had a difficult life since civilization came to Montana. In the 1890’s Butte was the wealthiest city in the USA, copper was king, and the Clark Fork River paid the price. The abuse of the Clark Fork continued through the 70’s and beyond, but it has slowly been reigned in and stopped.

When you see rising trout in downtown Missoula, you see a testament to dedicated conservationists, willing to buck the system to re-establish a clean, healthy river system. From Trout Unlimited in it’s national, state and local chapters, the Clark Fork Coalition and so many unnamed conservationists, the Clark Fork is thriving. In the last 20 years, the Clark Fork has become a super fund site, with tons of arsenic and other contaminants being removed from the site of the old Milltown Dam. That said, there are still issues in the watershed, and sadly, it’s strongly recommended to not eat any fish taken from the Clark Fork River.

As with all large, important rivers, the Clark Fork has both train tracks and highway directly along its banks. In order to maintain safety for trains and cars, the banks of the Clark Fork have been “set in stone” if you will, built to maintain its course and bank stability. The nature of the river between Drummond and Rock Creek is such that it doesn’t really hold fish, and is subject to algae blooms in the heart of summer. As we said, the Clark Fork doesn’t have it easy!

Blue Ribbon trout stream Rock Creek is the first major drainage to come into the Clark Fork (sorry, Little Blackfoot!). From the confluence of Rock Creek to the confluence of the Bitterroot River, the Clark Fork is a mid-sized Montana river. As the Clark Fork runs downtown through Missoula, it braids up into very fishable side channels. In fact, some of the best wading fly fishing below Garrison is found right here in Missoula. The area where the Clark fork starts to braid is called Kelly Island, and is one of the most popular fly fishing spots in town.

Once below the confluence of the Bitterroot River, the Clark Fork River takes on a whole new character. Now it’s a big Montana river, with steep sides and a deceptively fast current. It’s classic big water fly fishing, and it can be intimidating. Here’s a hint for those not used to looking at that much water with a fly rod in hand. Find a high point, like a bluff or a bridge, and look downstream. You’ll see the lower Clark Fork is exactly like that 20 foot wide stream . . . but everything happens on a much larger scale! There are still riffles, still glides and pools and seams. They’re just more difficult to identify at water level. Once you’ve scouted from above, make a mental map, and then go identify those spots at water level. You’ll start to find fish, and begin to understand big water.

Below the Bitterroot, the Clark Fork is a floaters river. As we said, deceptively fast currents, steep banks and a lot of water going by. Sure, there are wading opportunities, but they’re few and far between. Boats rule on the lower Clark Fork River. From a boat, you can drift to pods of rising fish. In deeper holes, with an indicator set at 8’, you can dredge up some monsters. The bigger the river, the bigger the fish get, and the lower Clark Fork is a major Montana river. Try some night fishing. You’ll be stunned at what slashes at your fly. If that gets you going, think about an overnight trip with us. We’ll put you on the water where others won’t be, and the night fishing is yours alone.

As you get closer to Idaho the river gets bigger, and a little more lethargic. Big, long lakes of minimal current are found, and they don’t hold a lot of trout, but the Pike and Smallmouth Bass fishing can be great. There’s going to be some rowing involved. Be ready for the afternoon winds as well, especially in mid-summer. Of course, they blow upstream, and can make havoc of your fishing. Be smart- when the wind is blowing 30 mph, don’t cast! It’s tough enough to keep the boat in line, much less fish. High side drift boats act like sails on those days.

Because the lower Clark Fork River is the main drainage for western Montana, things tend to happen a bit more slowly. As the Bitterroot River warms up in early spring, you’ll find the Clark Fork might be a week or so behind in fishing quality. Conversely, as the Bitterroot blows out in late spring, you’ll find the extra water in the Clark Fork allows fishing for a little while longer. The Clark Fork River has a great Western March Brown hatch, and Skwala stoneflies are found along the length as well. During spring, if you see a fish rise twice in the same spot, switch to the mayfly. 95% of the time, a steady riser is on the WMB’s, not the stonefly.

The same water logic applies to post run-off fly fishing for the Salmon Flies and Golden Stones. As the smaller rivers clear, the Clark Fork may be off color for a little while longer. Of course, if you go above Rock Creek, this doesn’t apply, because the Bitterroot River, Blackfoot River and Rock Creek aren’t pouring their run-off into the Clark Fork. The further up the Clark Fork you go, the clearer it will become. Which holds true for all rivers. The headwaters clear first.

When the heat of the summer comes, and other rivers are experiencing higher water temps and sluggish fly fishing, the lower Clark Fork River will stay pretty strong. It takes a lot of heat to warm up that much water, so in the dog days of August, the lower Clark Fork will still fish well. The heat of the summer on the lower Clark Fork has an added bonus, and that’s the nocturnal stonefly. The nocturnal stone is a huge golden that, not surprisingly, hatches at night. If you get on the river at dawn, you can toss out a size 2-4 dry fly, and expect to see some surprisingly strong action. The nocturnal stone isn’t well known to anglers, but it’s well known to the fish! Many times August isn’t the best time to fly fish Montana, but if your Montana vacation brings you here at that time, the Clark Fork River can be a life saver!

Some Missoula fly fishing guides think the lower Clark Fork is in its prime in the fall. The longer, slower pools with their eddies and seams get the trout to pod up and eat. It’s not surprising to come across 40-50 fish rising in one area, taking Blue Winged Olives or Mahoganies. It’s an awe-inspiring sight, and even seasoned anglers get that quick thrill of, “Here it is!”. It can be tricky, but from a boat these fish are accessible, and once you find the spot to cast from, the game can be ON! As the fall hatches wane, like every other river in Missoula, the Clark Fork goes to nymph/streamer mode until spring hits again.

An angler could spend an entire season exploring the length of the Clark Fork River, and still not experience all it has to offer. From the meandering meadow headwaters to the massive watershed moving into Idaho, the Clark Fork truly has something for every fly fisherman. And as you wade or float this western Montana river, think about how tough Mother Nature really is. After all we’ve done to the Clark Fork, she’s still fighting tooth and nail, keeping trout the length of that river. And remember the long, long list of dedicated conservationists who saw this river struggling and made it their goal to deliver the Clark Fork River to our children in better shape than we found it. Not only is it a great trout fishery, it’s a testament to dedicated conservation and the power of nature. Think about that as you land yet another Clark Fork trout. 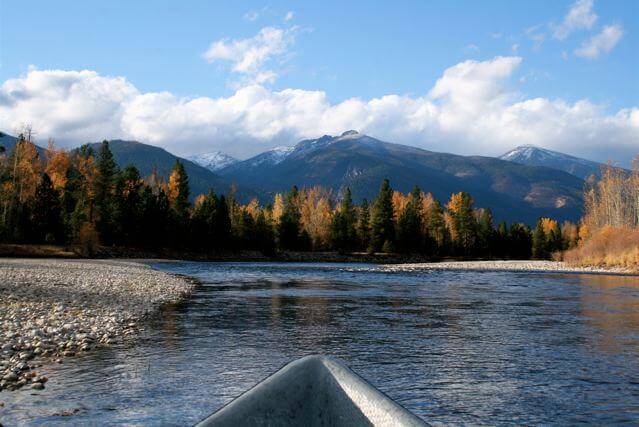