Matching The Hatch And Identifying Insects 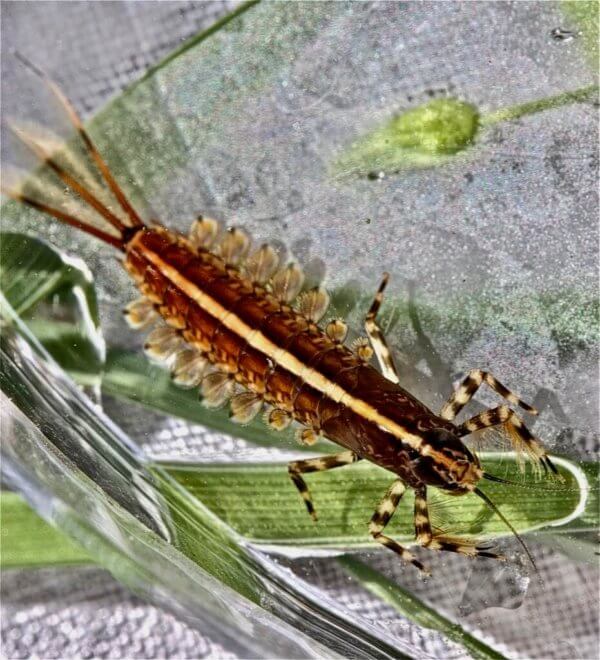 It’s a complicated world out there, the first time you dive in. Pteranarcys Californicus, Ephemerella Guttulata. It’s enough to send you back to the Royal Wulff and a Prince nymph. Which makes sense, because the only good description we’ve ever heard about why the Prince works, is it’s the nymphal form of the Royal Wulff! That’s a fly joke. You’ll get it before the end of this article, promise!

Insect identification is much easier than you think. Look at it this way. A guy walks down the street with a Chihuahua on a leash, and you think, nice dog. Right after comes a woman walking a Great Dane, and you think, nice dog. Now what on earth made you think those two animals were related to each other? Well, it starts with familiarity. 4 legs. Elongated snout, fur, canine teeth. Despite the size and color disparity, you know they’re both dogs. Because you’ve grown up around dogs, seen them all your life. it’s familiar.

As you spend time on the water, the sight of the insects will also become familiar. They’re smaller than a Great Dane, and no one will have them on a string, so you need to pay attention and look for them! The different ways aquatic insects fly, the way they emerge. As you start looking for insects, this all becomes nature, second nature, just as recognizing a dog did. And here’s another very positive thought about insect ID. You don’t need to know the latin name, or common name, of every bug that flies by. If a pale olive bug 11mm long flies by on July 5, find a fly in your box that’s pale olive and 11mm long, and tie it on. Simple as that. If the Missoulian Angler Fly Shop has done its job, you have that 11mm pale olive fly, and what they are is less important,

But there comes a time when you do want to know, and we get it. The MAngler has created a large online resource page called Hatches, which if we do say so ourselves, is pretty spiffy! Look at it, and the images will give you a good idea of what a caddis fly, mayfly and stonefly will look like. When you’re on the water, if you carry a net, looking at the real thing is a very simple task. Get a stocking  and stretch it over your landing net. Instant bug net, suitable for subsurface or in-flight grabbing. It’s easy to carry and store, and you don’t have an extra piece of tackle with you. There are also commercially available bug seines for this purpose as well. Start by kicking a few rocks directly upstream of the net, which is touching the bottom directly downstream of where you’re moving rocks. Look at what precipitates into the stocking. It will take a minute to get the hang of keeping the seined materials of the face of the stocking, but you will. You’re going to find more in the seine than just bugs! You’re going to have to move some stuff around to find the insects. Look and see what you’ve found. Are they big? Small? What color are they? How many of each are you finding? And once you’ve done that a couple of times. You’ll have identified the prevalent insect. If its brown, and 11mm long, tie on a nymph that’s brown and 11 mm long

Think about this. You’re a predator. An average hunter knows his quarry. A good hunter knows what his quarry is after for sustenance. We’re not on the plains of Africa, where predators congregate around water holes. Our prey lives in the water, so that doesn’t work! We have to learn about what our prey needs in other ways. When walking to the river, you’re paying attention.  See a spiders web? Look at it carefully. What’s in it. Shake a few branches next to the river as you walk AWAY from the put in. Let’s emphasize that. Most fishermen get no further from their car than it takes to drink a beer and get a new one. We tend to walk to where the path gets to be only a suggestion, and then start fishing. It makes a big difference. But we digress…..

You’re paying attention to your surroundings. You’re looking, and making the proper moves, to ascertain what the most abundant food form is. Shaking branches, looking for shucks along the shore, these are all things good anglers do to figure out what the trout are most likely to be feeding upon.

Aquatic insects are cyclical. If you see that pale olive insect in July this year, you’re going to see it again next year at the same time. The MAngler has a Hatch Chart in our Resource pages as well, detailing every insect important to the trout. The chart will say what species the insect is, and when it’s like to be found on the Blackfoot River, Clark Fork River, Rock Creek and the Bitterroot River. When you’re out on July 5, look at the hatch chart. It will give you a starting point to insect ID, because you can eliminate a lot of insects that won’t be on the water at that time of year. And you start looking at the bugs on the water.

On July 5, you see fish rising, and there’s a bug on the water that’s pale olive and 11mm long. You catch one, and it has an elongated body that curves upwards, 6 legs, large eyes and the wings stick straight up and back over the body. You’ve done some research, (or used your phone to access the Hatches Resource Page) and you ID the shape as a mayfly. Boom! It’s on like Donkey Kong! It’s like figuring out your first dog. The hard step is over. Now, any time you see that shape, regardless of size or color, you KNOW it’s a mayfly. The rest will follow, names, emergence times, etc.

The same will happen for stoneflies and caddis. You’ll ID your first one, and all of a sudden those worlds open up as well. And then, the river will start to look like a bug hatchery. When you’re not sure what exactly you’re looking for, it’s really difficult to find it! But as you spend more time on the water, and start to see the insects as stoneflies, or caddis, all of a sudden they seem to pop out for you.  You’ll be surprised you could have missed them all the other times you came to the river. You’ll start to understand what the birds are doing, wheeling across the surface of the water, and use their actions to locate insect activity. Patterns will start to emerge on the river, patterns that will provide you more successful angling in Missoula, and anywhere else you take the long rod out for trout.

It’s a big step, learning to ID the different insects on the river. We know anglers who aren’t comfortable without knowing latin names, the range where they’re found, life cycles and the factors that trigger their emergence. Some just want to know the name so they buy the right flies! Other could care less, and just go a-fishing. Find your own comfort level, and don’t be influenced by others. At our Missoula fly shop, we have customers who really care, and we have people who used to care. It’s all good! Fly fishing is supposed to be fun, and it’s up to you to decide the level of fun you plan to attain. No matter what level of entomologist you plan to be, the MAngler plans to be there helping you get to the level you’re striving for, online and in the shop.

One last thought. You can look a little silly, running down the river in waders, waving a landing net in the air and cursing as your swipe completely misses the mark. Get over it! We’ve all been there, we just don’t talk about it anymore!!